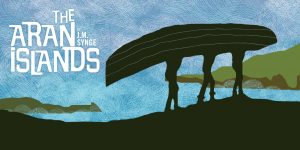 a hypnotic performance… Conroy beautifully captures the islanders as he takes us on an intimate journey. For those 100 minutes, you feel transported back in time.
– Huffington Post

a pleasure… Conroy slides in and out of the voices and physical characterizations of the storytellers and their subjects with understated style and panache.
–  Talkin’ Broadway

At times in this one man show the narrator is indistinguishable from the locals.
It’s a remarkable performance.
– Michael Moffat, The Irish Mail on Sunday

The Aran Islands is a compelling adaptation by Joe O’Byrne of John Millington Synge’s classic work. In 1898, upon the advice of W.B. Yeats, Synge went to live among the islanders to “express a life that has never found expression.’’ In this grey, sea-battered landscape, full of mist and wild rain,  hearth is home and storytellers regale with tales by the fire;  here Synge found inspiration for many later works including The Playboy of the Western World and Riders to the Sea.  Brendan Conroy, one of Ireland’s finest actors, captures the spirit of Synge and of this bleakly primitive, mystical land on the West Coast of Europe. In the great history of Irish storytelling, The Aran Islands is a haunting and transporting experience built around an incredible performance. 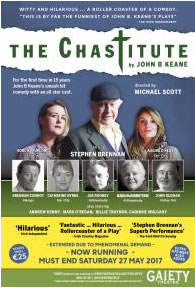 ‘Without Name’
‘Without Name’, directed by Lorcan Finnegan is currently being shown in The Lighthouse Cinema, Dublin.