The Aran Islands is a compelling adaptation by Joe O’Byrne of John Millington Synge’s classic work. In 1898, upon the advice of W.B. Yeats, Synge went to live among the islanders to “express a life that has never found expression.’’ In this grey, sea-battered landscape, full of mist and wild rain,  hearth is home and storytellers regale with tales by the fire;  here Synge found inspiration for many later works including The Playboy of the Western World and Riders to the Sea.  Brendan Conroy, one of Ireland’s finest actors, captures the spirit of Synge and of this bleakly primitive, mystical land on the West Coast of Europe. In the great history of Irish storytelling, The Aran Islands is a haunting and transporting experience built around an incredible performance.
‘The Aran Islands’ New York Reviews

The Aran Islands a hypnotic performance… Conroy beautifully captures the islanders as he takes us on an intimate journey. - Huffington Post

"A pleasure… Conroy slides in and out of the voices and physical characterizations of the storytellers and their subjects with understated style and panache." – Talkin’ Broadway

"At times in this one man show the narrator is indistinguishable from the locals. It’s a remarkable performance." – Michael Moffat, The Irish Mail on Sunday 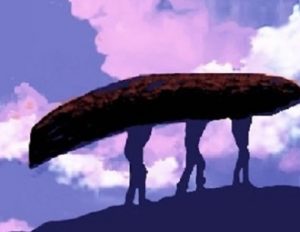 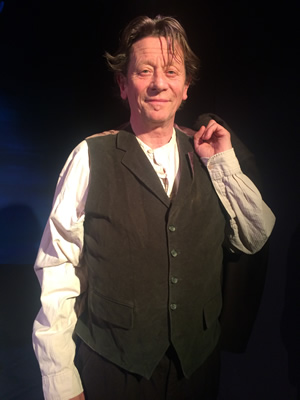 15th June, Brendan opens at the Irish Rep Theatre in New York in ‘The Aran Islands’ playing to July 22nd 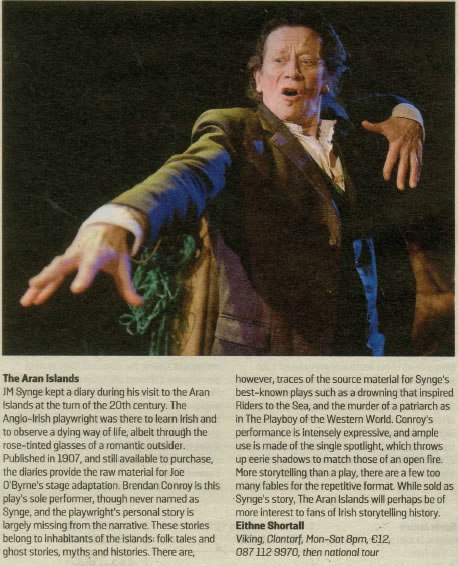 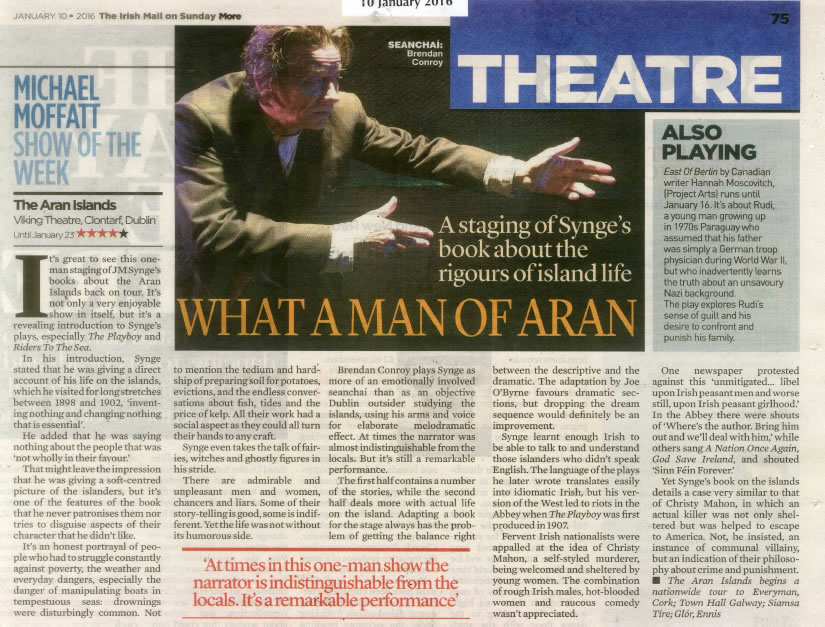 The Aran Islands has a remoteness that perhaps today is not as noticeable, aided by the hotels, B&Bs, ferries or small planes that bring the visiting tourists there daily. When J.M. Synge visited the islands more than a hundred years ago, he noted that to the locals the interest of most people living outside the islands seemed to be the study of the Gaelic language, rather than perhaps the majority of visitors today.

Joe O’Byrne’s adaptation brings us to the islands on Synge’s first boat trip, the ebb and flow of the water prominent against the fishing and nautical set, alongside some wood and turf cuttings and a sole, wooden chest with a piece of paper and a pen on it, reminding us that we are seeing
everything through the eyes of a writer, something the play itself doesn’t let us forget. Synge’s interest, which is outlined in the programme notes on his life, are somewhat more personal. Synge, best known perhaps for The Playboy of The Western World, took inspiration from Yeats who was
enthusiastic about the Irish renaissance and urged him to live on the islands and ‘express a life that has never found expression’. Synge did just that and over four years spent part of each year on the islands, living as they did, and documenting the stories, the funerals, the evictions, and lives of the islanders, some of which are brought to life
on stage effectively, but with the observer’s eyes and words. Brendan Conroy gives life to Synge, dressed as an islander, the scuffed

and worn toes of the leather shoes adding a roughness to the costume that is far from upper-class writer. It is an excellent performance, given
that it is over two acts, and Conroy is the sole performer, although some of the island characters do come over as being similar. His voice
and body enact the ups and downs of the sea, in at times a very earnest, even highly dramatic performance, tempered by the quieter,
more intimate moments; Joe O’Byrne’s lighting design being Conroy’s best aid, working in unison with the actor creating the scenes, with
some images difficult to forget even after the performance has long ended.

The programme notes do tell us of the importance of Synge’s writing about the Aran Islands, creating a social document, and of course, it is not so easy to adapt a social document to the stage. It could be more selective rather than be very faithful as it seems to be, or even use some of the intriguing back story as part of the narrative. There is an
earthiness to it, but some more reflection might yield more results. O’Byrne has visible love for this piece, adapting, directing and lighting it, and it is easy to see why. Any writing that charts a way of life, especially one now gone, is intriguing, a reason travel writing can be so curious especially those written many years ago and read in the present.
Bringing this to the stage can only be a good thing, although a little trimming might be the touch that reels us in completely.

The Aran Islands
Co-Motion Media at the Viking Theatre, Clontarf

One-person performances can often disappoint due to the flimsiness of content or the limitations of the performer – or both. However, theatregoers need have no such misgivings about this piece, devised
and directed by Joe O’Byrne and performed by Brendan Conroy. Based on J M Synge’s journals from his extended visits to Aran from 1898 to
1902, the content is rich, illuminating and diverse, and Conroy’s performance readily brings to life the stories of the Aran islanders as he moves with ease between narration, description and the dramatisation.
The first act evokes Synge’s arrival on Aran, his response to the place and the reaction of the islanders to this stranger. Conroy is consummate
in conveying the future playwright’s awe and excitement at what he encounters on the islands – a world away from the privileged society of
refined Rathfarnham, the RIAM, TCD and the Sorbonne that were his natural milieu. Soon the outsider is gaining the trust and acceptance of
the natives, hunkering down by hearthstones to hear stories of real life and folktales, elements of which will find expression in his work. The actor’s recreation of the storytelling is animated and highly entertaining, very much in the tradition of Eamonn Kelly’s seanchai, with indeed more than an echo of Kelly’s Kerry rhythms and intonation on occasion.
The second act presents Synge’s experience of and observations on events and experiences of the island community. Synge is a powerful
witness to the grief of eviction, the close sense of community that prevails among the islanders and the contempt for anyone who would
betray that community loyalty. His detailed description of two very different funerals and the rituals and expressions of grief is but one of
many gripping and illuminating episodes, told with consummate, quiet understatement by Cauldwell. Not so quiet – and for this reviewer the
only jarring note in the entire evening – is the hyperactive dramatisation of one of Synge’s dreams. It seemed as if its sole purpose was to offer animation and excitement, in contrast to the rest of this section. Stories of the “white boards” brought to the island, the sound of the
coffin-making and the ollagoning of the mna caointe are obviously the foundation for Riders to the Sea. Similarly we recognise the origins of
the Playboy’s Christy Mahon in the story of the young man who killed his father, was concealed from the law by the islanders until smuggled
to America, their sympathy rooted in the observation that no man would kill his father if he could help it – and no doubt influenced by their
experience of the law as agent of eviction. In the amusing story of the would-be widow and her lover, we combine elements of In the Shadow
of the Glen and The Playboy’s Widow Quin.
This is a fine evening’s theatre and well worth venturing out to even on these chilly evenings. It continues at The Viking until January 23rd.